Ramblings for an Autumn Kitten

Ramblings for an Autumn Kitten

Wait, wait...It is Winter, not Autumn. You say.

Technically you are incorrect.
You may feel like it is Winter, the world already may be starting to look like Winter, Nature may be preparing herself; but we are still in Autumn for just shy of another month.

Since it is late Autumn, my favorite time of the year, my mind has been wandering more so than usual and is stirred constantly by reminders of all that which we associate with this season; falling leaves, pumpkins, Pumpkin Spice Lattes, turkeys, Thanksgiving…

You see, this melancholic time also reminds me of a dear girl who was close to me once and whose since seemingly gone stray. She was the younger one, who shares our persuasion, but has no intent or desire (and also due to the benefit of her physical traits) to focus on a singular partner. You might recall her if you are a regular reader here and also have an impeccable memory.

She has an honesty about herself that I adore, but also is a bit too genuine in her self-deprecating manner at times. (For clarification I am not referring to the "self-deprecating" trait some people pretend to have in order to make themselves more likeable. Some find that endearing, I just find it fake and annoying).

One evening, in an Autumn that feels both just as if it were last week and simultaneously as if  years ago, we were taking a late night walk with the intent and opportunity for her to offload some of the heavy weight of her current life’s concerns to me. As we approached a business district corner she motioned if we could go into that popular mermaid café. You know the one. The one on every other corner of every major US city and airport.

“I need my Pumpkin Spice Latte,” she whispered and bowed her head.

I was genuinely surprised, not by the choice of beverage in of itself, as you may assume, but rather that she was interested in such. It was such a stark contrast to her dark personality and persona.

Misunderstanding my questioning, she looked up at me, puppy-dog-eyes peering up from behind thick glasses and below her wide brimmed and oversized black floppy, and shrugged,

“Sorry. Despite it all, I’m just a basic bitch. Hat and all.”

As you may be aware, Pumpkin Spice Lattes (PSLs) have become part of the American landscape. And in the latter half of their existence, their detest has also become an equally huge part of the mainstream landscape.

There continues to be a lot of fun being poked at those who enjoy the hot beverage as evidenced with just these few examples below. I'll admit I do indeed find them humorous. Tell me you don't? 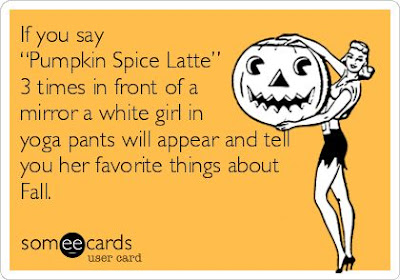 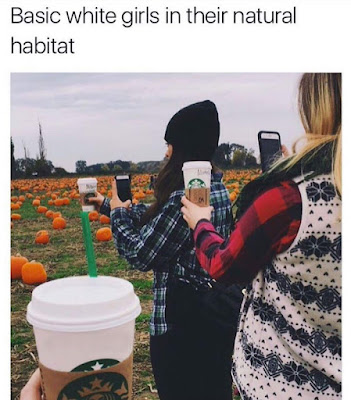 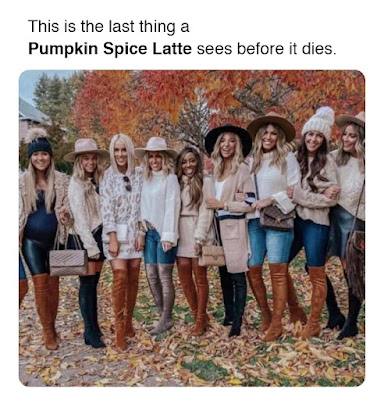 Kidding aside and digging deeper, and also admitting I may be very late to this debate, I’ll state my facts.

Look, I’ve never tried a PSL and neither have I ever felt the desire. No bigger reason than just personal preference. My preferences are exactly that, mine. Not to be imposed on others. And vice versa. Simple.

Therefore, I don’t understand the backlash against PSLs. I don’t get it, never have. To each their own is sort of my belief on most commercialized things (on most things actually).

I recently stumbled across a few articles, including this one and this one, which argues that the anti-PSL stance is really at its root about sexism and possibly yet another sign of misogyny. This of course can be its own debate, but for the time being let’s stick to the surface argument.

That a young lady feels shamed for liking what she likes because it is deemed basic, an often “white-girl” beverage of preference, is really disappointing to say the least.

Circling back to a particular young lady, that even she felt she had to second-guess her comfort drink even to me - someone in her trusted sphere, says so much.


Not only did she have the drink, but I proudly bought it for her because in my book there is no shame in finding tiny comforts when this harsh world gets too heavy. 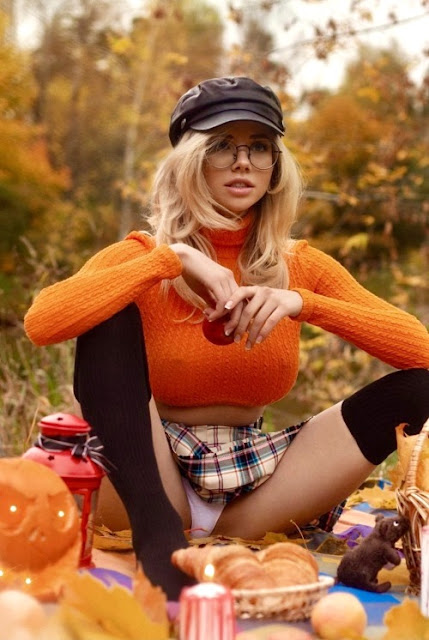 This image reminds me of said dear girl in so many ways including many physical, beautiful things about her (Well, minus the ample chest, but definitely not excluding the forced presentation of her lightweight gauzy white triangle, that beckoning and welcoming kitten door). I so often wonder where she is, especially now during this melancholic, forced gratitude, time of year.

So tell me, are YOU a fan of Pumpkin Spice Lattes?

And if you know the origin of such image let me know as google reverse image search has failed me yet again.

Posted by Enzo at 10:34 AM
Email ThisBlogThis!Share to TwitterShare to FacebookShare to Pinterest