I can't believe we are this far into the Holiday Season and at Years End already!

Honestly, I've never been a big, over-the-top, holly-jolly Christmas type. Maybe that is no big revelation and you might have guessed that about me, but I do have my valid reasons.

That being said, I don't know about you, but it has been an extra struggle to get into the festive holiday spirit this year. I'm certain part of it has to do with the ongoing, seemingly never-ending, COVID and its related losses. Plus, it has been a particularly tough year personally due to some major life events, some of which I have shared here and others even more recent sad news I have yet to share.

Closer yet, there seems to be a subtle feeling going around the blogosphere that I've been picking up on. The energy doesn't quite seem to be on full throttle holiday cheery mode.

If I had it in me to share a new full story with you, I would. Unfortunately, that is not the case today. Therefore and instead I offer you an excerpt of a story - somewhat of a holiday story in that it takes place during the holidays. I hope you can follow along and find some joy in it, if nothing else at least a distraction.

“No. I’m good” and “No” the replies overlapped.

A gruff hoarse response contrasting and overshadowing the other squeak and whisper.

“Come on, I believe one more is in order.”

A clink and a chug of thick liquid. Silence followed by a couple of footsteps and then a slap. A muffled protest.

Daniel sat back down into the wooden chair, picking up his mug of eggnog in the process and joined his friend once more as they both stared out the large breakfast nook window. 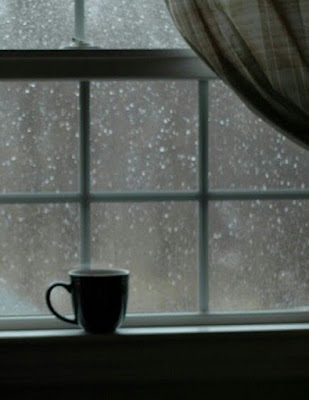 The two men sat in silence characteristically while nursing their drinks.

Just outside, the soft falling rain emptying the last of the clouds seemed to overpower the sounds inside the house.

The silence inside continued uninterrupted, but for the intervals of audible sips and clinks of ceramic onto the wooden table and an occasional lone almost indistinct murmur.

It was all finally broken by the pushing back of wood on wood.

“Well Daniel, I appreciate the hospitality, but it is getting late,” as he stood up, steadied himself with the help of the wooden arm of the chair, and ceremoniously stretched out his hand in front of him.

“You are welcome to stay,” he repeated loudly.

“No. It’s late,” Walter grumbled fiddling with his ear.

“Well if you feel like talking some more tomorrow or need a ride to church in the morn', give a ring.”

“No way am I going to that pseudo god-fearing, modern attitude converted mass. Back in my day, we didn’t have all this ‘acceptance’ nonsense. We rightfully feared God.”

“Come on, I’ve told you about that. Fr. Mario is a good guy. Sure he’s young and all, but he’s still a priest…”

“Says you!” Walter interrupted, not moving from his position just extending his hand further.

Daniel walked over and grabbed the older man’s hand and held it firmly, “Not me, says the Church.”

Daniel stepped aside as Walter reached for the back door.

A shuffle of claws on hardwood grew louder as the dog rose to his feet. The large intimidating canine slowly headed towards his master, but not without first making a stop. Sniffing the floor and further diverted himself following flesh for a moment, lifting his head and poking his nose upward.

“Stop it. Stop it,” Rebecca swatted behind her without turning around.

Walter snapped his fingers and his companion immediately trotted to him.

“Say good night to that Rebecca girl, will ya."

"She's the one you should be worried about, Church doesn't seem to be doing that one any good." Walter muttered on as he exited the house, stepping into the night led by his dog and aided by his white walking stick. "If she had manners she'd be here saying...”

“You know he shouldn’t be walking alone, let alone in the rain. You really should walk him home.”

“He can handle himself. And besides there is no way he’d let me.”

“I don’t understand that.
Or how you two just stare off into space without talking for so long.”

“We communicate. You don’t get it.”

Daniel sat back in his chair, reached for his drink and gulped the last of the spiked nog before putting down the empty vessel with a bang.

“Just because you think you need to be talking every waking moment. You could learn a lot from keeping silent once in awhile. Apparently you still haven't learned your lesson.”

Taking an audible deep breath, he stood up, walked over and stood behind her.

“Oww!” she nearly hopped up from the impact of his hand against her barely shielded bottom.

“Come on let’s go to bed,” he extended his hand.

She looked over her shoulder and took his hand. Slowly turning she stood up and then stretched and shook out her bare feet. She attempted eye contact for a quick moment, and then realizing once more that she never could read him, quickly gave up and instead proceeded to smooth down her dress.

“Wait, I want to finish my drink,” she hesitated.

He stared at her firmly.

“Much better. Go ahead.”

He walked away, opened the screen door and stepped out onto the back porch. The clouds were running across the sky leaving random rips between them where the dark sky and forgiving twinkles of the stars shown through. The twinkle of our pasts letting us know that there was hope. She eased herself into the chair, but shot up on contact. She tried again resting herself only partly onto the wooden seat. Taking a soft sip of her drink she stared out at his silhouette. She wished she could understand him more, but at least she knew that he understood her.

But more importantly she knew he understood what she needed.

I hope you were able to follow along and find some joy in it.

Even better, if you are a long time reader here and you recognized some if not all the characters. I hope so as well. If you do, please let me know.

10 comments: Posted by Enzo at 12:31 AM
Email ThisBlogThis!Share to TwitterShare to FacebookShare to Pinterest