Something different: A snippet of Reflections

Here is something seemingly entirely different than the usual fare, a snippet of a longer story. Not off topic per se, but no scenes of our favorite topic either.

She walked away from the mirror.

Unresolved and unsettled she squirmed in her seat.
Huffing she returned to it. 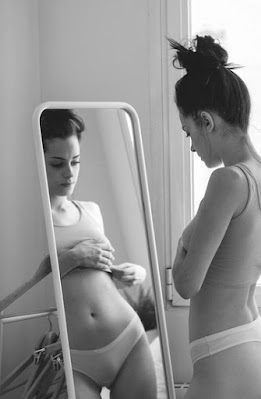 Inspecting her body yet again, scrutinizing the imperfections for the countless time. Her eyes zeroed in on individual square centimeters of her slowly, naturally aging skin. Frustrated she tugged down on her t-shirt and decided to refocus the inspection elsewhere.

She parted her uncombed hair, pulling strands apart on her seek-and-destroy mission. Without warning, she captured a traitor. Held it close to her glaring eyes wanting to send it back to its partners in treason with a warning. Instead it slithered from her fingers in a haste escape. She searched the top and sides of hand with no luck. It was gone, but no doubt a sign that there were hundreds more to come.

Turning her focus elsewhere once more, her chest became the next area of her scrutiny. She adjusted her posture to no avail. Defeated she reminded herself that her perkiness was predestined, challenged by the misfortune of small genes. Carrying on, she closed her eyes, inching her hands down cautiously around her hips instead and continuing on toward her bottom preparing herself for further genetic blame…

The click and crack of the key and door saved her from her own prosecution. Scampering across the room, she scanned for her book, grabbed it in passing on her way to her perch by the window. Taking an audible deep breath she attempted to relax herself.

He walked into the living room and saw her at her usual spot. In full feline nature her legs wrapped underneath her as she sat there indifferent to the world. 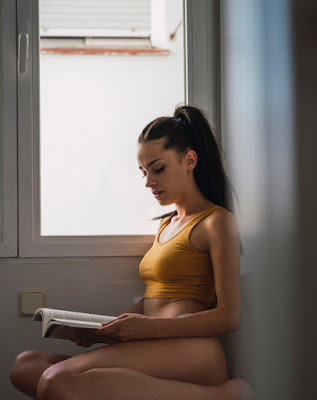 He greeted her with a gentle kiss to her forehead as she rose to her feet without urgency.

“Hi Beautiful, did you have a good day?” He asked in genuine admiration despite the concern of her unkept appearance.

She did not answer as she squirmed out of his incoming embrace. As much as he adored the her choice of usual at home attire, the minimal cover of a thin t-shirt and barely there panties; he was worried that it was most likely evidence that she hadn't left their place all day.

“It is actually nice out; Fall is definitely coming. Did you get out for some fresh air like we talked about?”

“There is fresh air by the window,” she replied walking across the room only to settle a few feet away into the sofa.

“Whatever,” she mumbled her interruption.

“Come on, I picked up dinner. Let’s eat” He waited for a reaction that never came before turning towards the kitchen.


Rolling her eyes, she eventually relented. Stretching her bare leg from underneath herself, her toes blindly searched around the floor pushing away magazines and remote controls before finally making contact with her flip-flops.

“By the way, we were invited to a party on Friday, so plan for it now. Something to look forward to,” he called to the sound of the approaching rubber soles against hardwood as he set the table.

“Amy is having a pre-holiday season get-together,” he replied sorting out the take-out containers as she settled into the wooden chair and pulled the actual house cat off the table and into her lap.

“Yes, and besides it will be good for you to get out. I thought you’d enjoy getting dressed up and doing something fun.”

“And the problem is?” he stopped the distribution of utensils to make eye contact with her.

“The problem is… the problem is I hate Amy! And her big tits! And the way you stare at them and how she flirts with you and rubs herself all over you…” she snapped, whipping her hair away.

“Doll! Doll! Look at me,” he tried to get her attention as she hid her face into the cat’s fur. “None of that is true.

You know very well the only girl I can’t keep my eyes off is you, especially when we go out. You know I love the way you look all prettied-up.

I was actually hoping you’d wear that tight form-fitting black dress I like.”

He waited for a response and when it didn’t come he continued on.

“I really like how it shows off your big ass so perfectly and highlights your long legs...”

In a flash her hand had chucked the disposable wooden chopsticks across the table, as she backhanded and spilt the box of noodles in the process causing the cat to bound off her lap.

He watched her leap to her feet and out the room in whirl of pent-up frustration. He stayed seated listening to the click-clacking disappear down the hall followed by the expected slamming of the bedroom door. He watched the dark Szechuan sauce making its way across the table where it cascaded in a slow trickle over the edge to land at the paws of the waiting cat.

Your comments and thoughts are always appreciated.

No comments: Posted by Enzo at 1:42 AM
Email ThisBlogThis!Share to TwitterShare to FacebookShare to Pinterest