Fair warning - This is a much more serious natured reflection than what I regularly post.

I am not a big NFL football fan. As some of you may have picked up on, I prefer my football in the european variety. Yes, yes I know, very non-American and unpatriotic of me. Report me to the authorities and revoke my citizenship.

American football is a sport not played out on an international level and thus part of the reason I am not a big fan. In its defense, at least it doesn't pretend to as other sports do (cough..MLB…cough).  However, I imagine if it were on a world level it might be similar to the World Basketball Championship. Which think about it, is that really even fair? Is it any surprise who won this year?

If you follow the NFL, American sports channels, or simply follow American broadcast news, you are well aware of the Ray and Janay Rice abuse story. I won't repeat it here; if you are unaware of the details it is easily found online - everywhere.

In simple straight-forward judgement of another man - He was wrong for hitting her. Period.

Not looking to go into all the sides of this issue; her "role" in this, his "remorse", the NFL's role and lack of action or over-reaction to some, etc.

Rather, what I have been running through my head over an over recently is focused on how this relates to this spanking desire we all share. In particular the domestic discipline lifestyle some of us choose to live.

I have a problem with punching out a woman, striking her down and having her hit her head further resulting in her going out cold. This to me is domestic abuse. I think very little of the man who threw that punch.

But then I stop.

I am a man who has no problem spanking a women's bare bottom until her bottom is throbbing and her skin tone is flushed red and radiating heat. I have no problem belting or paddling or intensely spanking a woman's behind until she breaks down in tears of pain and remorse.

How is this different?

There is underlying consent. I don't need to explain it to you readers.

But what does the outside world see? Do most people see spanking as the same thing as punching a woman in the elevator during a heated argument?

I believe a lot of them do.

But I also know most of American society's view.

I believe this is why husbands who are introduced into domestic discipline lifestyles and asked to be the dominant partners are weary. Rightfully so.

Like the Rice scandal perhaps there would be some acceptance behind closed doors. A high five upon telling a friend that you spank your wife and "put her in her place" on occasion as needed. But it is a blurred line that might also high five a punch to the same…sadly.

Furthermore, the moment these actions would become public, the support would be gone. Charges could easily be pressed and judgement passed if nothing else. Judgement not only of the man involved, but judgement of the woman as well… and none very supportive.

Ice that bitter-sweet cake with the fact that on numerous occasions, not only did I commit the act of instilling some much needed, well-deserved firm discipline; but on many of those  occasions I also took pleasure in it.

7 comments: Posted by Enzo at 5:11 PM
Email ThisBlogThis!Share to TwitterShare to FacebookShare to Pinterest

"I never thought you were a tits man."

"Excuse me?" I asked the Beauty which was holding tight to my arm, without breaking my stare from the stylish Beauty walking in our direction "What makes you say that?"

"Really? You don't know why I am asking?" she squeezed my arm in soft protest.

"No, I really don't" I answered still in my fixated trance.

"You are staring at her rack" she groaned releasing my arm in frustration.

While the jet-black haired Beauty swayed and weaved her way through the crowd towards us with minimal effort; the jealous Beauty at my side now struggled to keep her balance on the bumpy ride.

The object of my momentary attention stepped closer and deeper into the crowd until meeting my eyes. She instinctually turned away and then giving in, turned back. She held my gaze, following it down upon her own curves to where my eyes rested and then shook her hair, seemingly to break the focused energy. A hesitant smile was immediately suspended upon realization that I was not alone on this subway journey.

"Don't be so insecure. I wasn't staring at her tits. I was actually wondering if she is wearing leopard-print panties to match her outfit" I replied matter-of-factly; noticing heels, purse and jewelry all in uniform animal-print. "What do you think?" 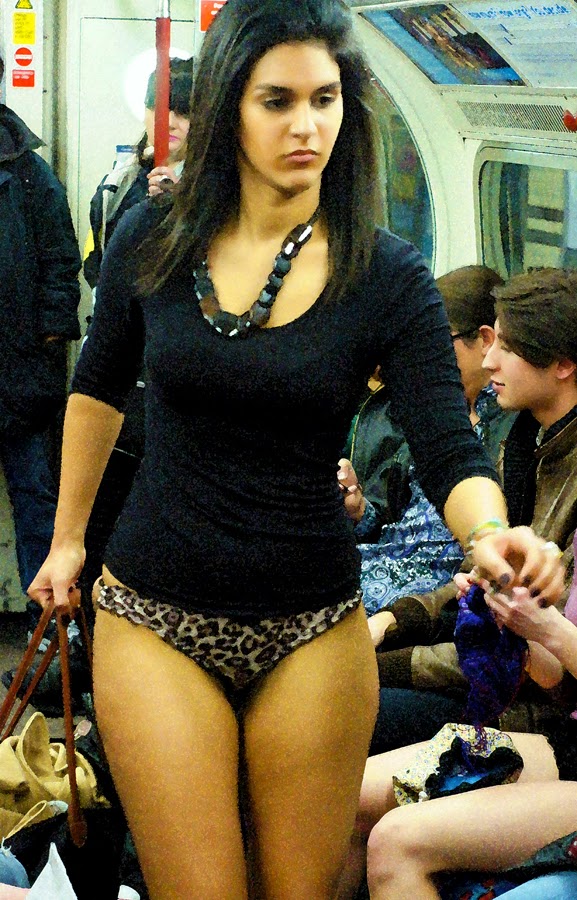 "Uggh," groaned my Beauty while blatantly pulling herself tight into my arm, "You just have to be careful. You don't realize you give off this look that make us think you are undressing us with your eyes."

"Oh I'm way beyond picturing simply that..." I replied, returning a very firm, yet more intimate squeeze on her beautiful perky bottom.
"Don't worry, I'm going to show you all about it the moment we get off this train; including teaching your ass a very special lesson about your jealousy."

Hope you enjoyed this snippet.
Don't forget to Vote! It really only takes a second and is completely anonymous!
Remember you can vote for more than one item within the poll.

Also, I added specific gender questions to this poll.

Of course any and all additional comments are always welcome & appreciated!

7 comments: Posted by Enzo at 11:13 AM
Email ThisBlogThis!Share to TwitterShare to FacebookShare to Pinterest