Political Intermission: If only...

I can't believe it is late February already. So a quick post to brighten your day and hold you over:

If you live in the United States, like yours truly, you are well aware of the pre-Presidential election whirlwind of media frenzy that engulfs this time of year. To say the opposing opinions are strong is to put it mildly....

One of the favorite topics of both sides of the political spectrum is the much debated and heated topic of Health Care Reform. Well that is a complicated issue  and I am not here to politically sway you one way or another.

Ideally, I would vote for the reform to begin with the Nurses. A new set of Rules and Regulation would be created to improve Nurse morale which in turn would improve everyone else's. In fact, I would volunteer to go over the new set of policies with these Nurses. I am sure I would no doubt be faced with opposition, but not to fear, as I would be prepared to work long and hard with any naughty nurse to make sure she absorbed all that was covered in the clipboard of new Rules and Regulations; beginning with:

Item III. Subsection C: New Uniform Regulation
Nurses will be required to wear mandatory white uniforms that  are no longer than eight inches above the knee in length. Uniforms will be bookended with uniform caps and as mandatory black high heels. And of course sheer white panties, with an opacity no greater than 30%, will be required.* (*Unannounced mandatory panty inspections may be conducted whenever and wherever deemed necessary. These inspections are to be done in full view of witnesses and ideally patients. All this for the better morale of the patients of course.) 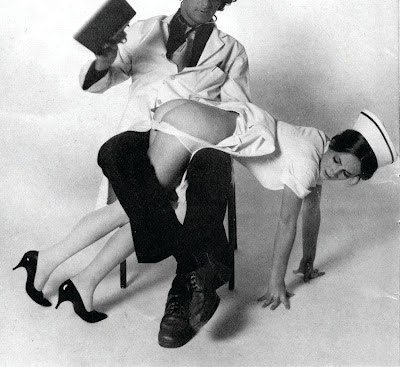 Can I hear from any registered voters, Democrat or Republican, ready to sign my petition to put this on the ballot? Anyone?
5 comments: Posted by Enzo at 3:00 PM
Email ThisBlogThis!Share to TwitterShare to FacebookShare to Pinterest


Often times, life can often be mundane and my only salvation has been a healthy imagination. Let's help each other get through the everyday by drawing a picture so to speak of what could be when everyday situations can become so much more... more entertainting...more exciting...


I don't know about your commute, but  mine is filled with trials and tribulations and today mine has peaked...again. My rather extensive commute is made up of three parts. A subway ride being the longest part of the three steps and is often times the most unbearable. I am not looking forward to getting back in the reverse commute fray home this afternoon. 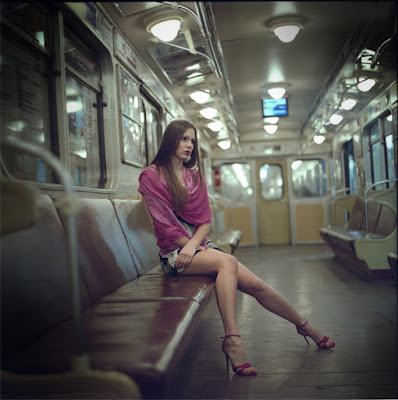 An empty train car with the only passengers being myself and a beautiful, petulant girl dressed in rather towering heels and a visually shortened dress both accenting her seemingly endless long legs. Reason for her petulant mood no doubt would have something to do with the combined factors of carrying her weight all day on those heels and the mandatory 9 to 5 grind of a necessary employment.... However, let's leave this girl for the moment and clarify that this, unfortunately, is NOT a picture of my typical commute.


No, unfortunately my train commute ride looks a lot less glamourous and a lot more like this: 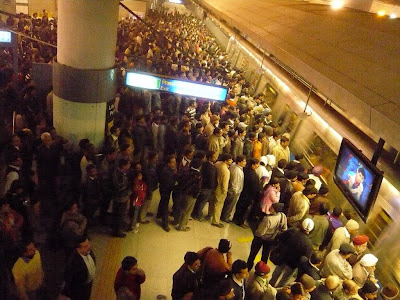 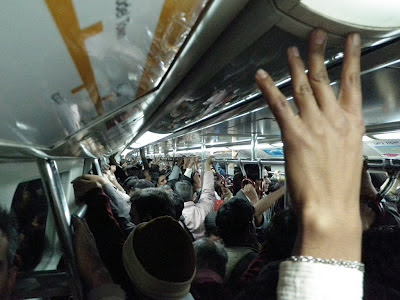 Even if there was a gorgeous girl on the train I probably wouldnt be able to see her through the crowd. Yes,dear Readers (Readers? There is someone out there reading this right? right? hellooo?) I often summarize my commuting misfortune to the like of "being stuck on the Ugly Train" more often than not.

Yeah, yeah beauty is in the eye of the beholder...blah, blah... but, before you start with the hate-email allow me to clarify that the Beauty I refer to is the everyday beauty of the female form and the Ugly...well the Ugly is found in the face of the shower challenged, or the carefree public nose picker, or the obnoxious guy who uses his cell phone as a megaphone to let us all know he is a deadbeat dad...you get the picture... all coincidentally sharing the same train and thus christening it "the Ugly Train". Occasionally, by the grace of God, I am blessed with a view of long legs and on extra special occasions some of the those long legs by some flux chance of good fortune are attached to an equally attractive genetically female body. 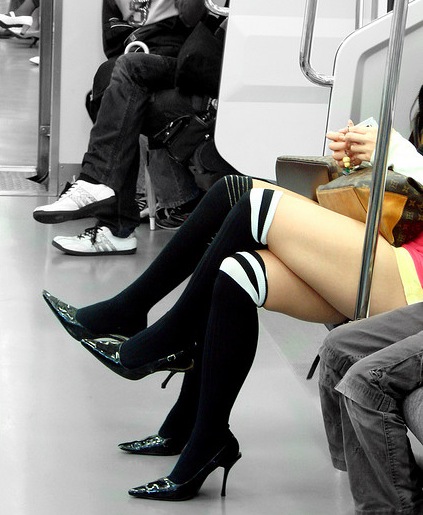 Attractive and distractive; yes indeed, but my ideal subway commute would undoubtedly be something reminiscent to a scene out of No Pants Day. No Pants Day? Have you not heard of this event? What started off as a few people doing a sort of unspoken improve has grown to more in the manner of a flashbob. The argument of weather or not the event has lost it's shock value is not for us to debate here.


All I wish for is to one day be on a train car with the female contingent of this group. This would undoubtedly make for an entertaining and enjoyable commute. But to make the experience truly enjoyable for me these girls would not be parading around in their panties voluntarily.


No, they would be embarrassed due to the fact that they would be required by Metro regulations to strip down to their panties for violation of various municipal codes:

IN VIOLATION OF NOT FREELY GIVING UP THEIR SEATS
BY THE DOOR TO SENIOR CITIZENS.
Immediately strip down to your panties and stand there in plain view of all the
other passengers until the train has come to the end of the line. Remain standing
even after the seniors have off-boarded. 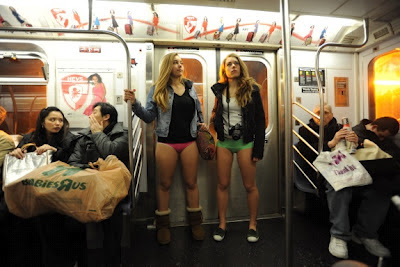 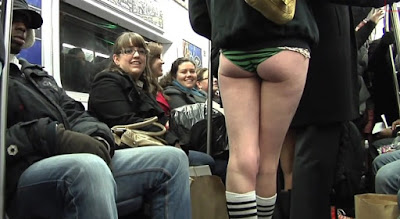 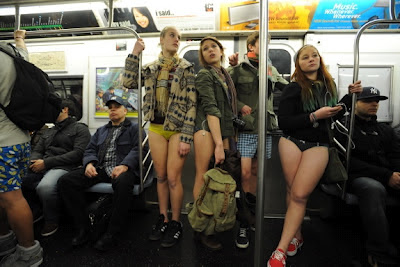 IN VIOLATION OF FARE EVASION:
Immediately strip down to your panties and remain standing by the ticket booth
in clear view while we process your ticket in typical government bureaucratic speed; all the while you stand there with no chance of evading the curious probing eyes of the thousands of other commuters. 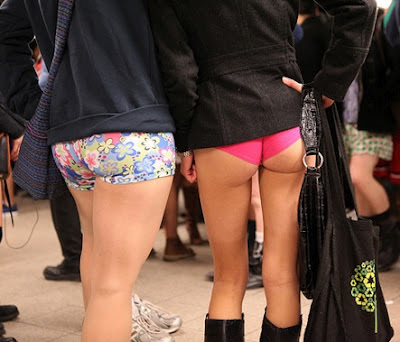 IN VIOLATION OF CAUSING AN OBSTRUCTION
WITH LARGE BAGS, LUGGAGE OR
OTHER UNNECESSARILY OVERSIZED ITEMS:
Please strip down to your panties and remain standing on the platform in clear view while we locate a station agent to process your ticket. This may take the equivalent of you missing five to six of your trains or a couple of hours; whichever is considered a longer time frame to you the violator. Remember to stand there in clear view of all the thousands of other commuters passing by in the trains. 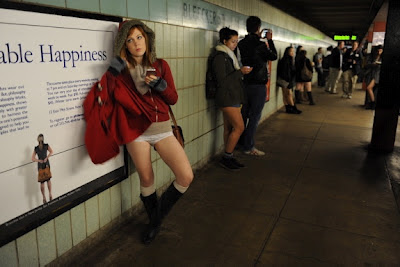 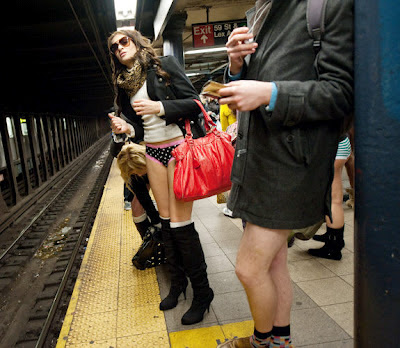 OK, so here are the questions Readers:
So which scene would you prefer?
1)
One of the municipal code violator scenes (either A, B or C) and as whom -
the embarrassed girl or the fellow lucky passenger?

2) back to our original ideal scene being one of the two lone passengers on the train car as either the leggy petulant girl or the lucky passenger about to issue her a citizen's violation and just punishment?

Let me know your choices and why. Don't be shy.

No comments: Posted by Enzo at 1:17 AM
Email ThisBlogThis!Share to TwitterShare to FacebookShare to Pinterest