Greetings All !
I am back from a delayed absence, due to five parts lack of certainty in that of which I write (Am I writing this blog in a manner in which people enjoy or am I completely off base??) and five parts real life getting in the way. I am back now and hope to hear from YOU readers - thoughts and comments, as always, are appreciated and hoped for.

So just a quick post with a simple question for you all to ponder and answer - Do you ever find yourself walking down the street, on the way to work or on the way to the mall, and come across a site such as the one pictured below? And if so, Dear Readers I pose the question:

Readers, male and female alike, when you see a vision such as this one below; of a beautiful girl showcasing her set of long lean legs and a curvy bottom encased in body hugging leggings so tight they become sheer, what is you immediate instinctual reaction? 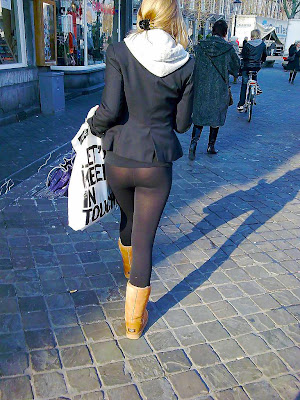 To me there is something mesmerizing about this... this vision of beauty. Do you react like I would and follow her shopping bag instructions? Do you immediately "want to keep in touch"? Yeah, I want to keep in touch by swinging my arm back, winding up and pitching my flat palm forward and slapping that ass with enough force to make an audible resounding slap for all around to hear and causing her to skip a step, all with hopes of leaving my signature on her cheek in the form of a glowing red palm-print that will undoubtedly be throbbing for the rest of the day and through the night.

And what about an extended vision such as the following...?
All I can think of is that a clueless girl like this is a jeopardy to not only herself, but to others. Bending over like this in full-view of oncoming traffic will undoubtedly cause a vehicular accident. My emergency situation reaction (and my civil duty in fact) is for the safety of all involved and requires that her thoughtlessness receive an immediate and severe punishment. 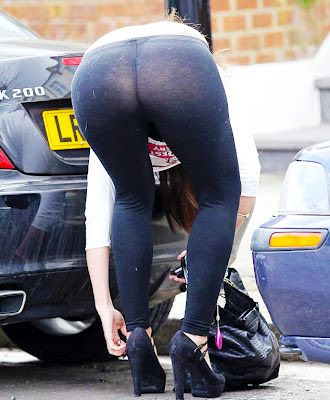 First and foremost, I would begin with one hard slap targeted at that thinly seamed stitch of thread traveling lunar north and south. A slap hard enough to force her to stumble forward in those high heels and end up, with "her pert end" -up; leaning against the trunk of that black car in an attempt to steady herself before her true punishment would commence with a resounding 24 spanking succession. This two dozen spanking would be just enough to serve as a warmup, just enough to remove that dog hair off her bottom; all to be followed by a much more serious punishment...


A punishment she would not soon forget as visions of a dozen witnesses, fellow female pedestrian shoppers; all frozen in their footsteps, each pointing and wide-mouthed, aghast at her very public humiliation would be etched in her mind forever more. Her memory of her unexpected and unprecedented punishment, imagined in part through their disbelieving (yet somewhat pleased) eyes, would be highlighted by her leggings being ripped open along the bottom seam. Her once pale bottom, now a rosy pink, would burst out and she would out almost be grateful for the temporary release of pressure. This would be short lived as her humiliation would then be heightened by her thong panties being tugged tight and up, to be utilized as makeshift reins for her Punisher's convenience. This would stay with her thirty times longer than the time it would take for the initial soreness in her bottom to fade. The vivid flashbacks of her tight bottom throbbing to a crescendo of glowing hot soreness as her anonymous citizen Punisher served her a severe lesson in civil safety education for all of a seemingly endless, but very humiliating ten minutes would be her constant reminder each and every morning when she stepped into her closet and contemplated wearing leggings again.

2 comments: Posted by Enzo at 5:37 PM
Email ThisBlogThis!Share to TwitterShare to FacebookShare to Pinterest