Back to College Secret

I have found that most people are either tuned one of two ways in regards to their calendars.

They either subscribe to the Gregorian calendar (our present day 12-month calendar starting in January) or to a School Year calendar (approximately starting in September and ending in June). I am tuned into the school calendar even though it has been awhile since I was last in school.

It used to be tradition that the schools would reopen after the Labor Day weekend. However, that has not been the case so much universally anymore for quite some time.

What am I rambling on about this time you ask?

Well it is not even early September, but the schools all seem to be in full session now including most of the Universities & Colleges.

Which all brings my mind back to the recollection of an all time favorite illustration. Yes, I am sure you have all seen and are familiar with it. 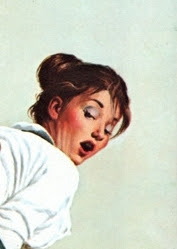 The famous spanking cover of National Lampoon in 1975, painted by Birney Lettick.

I have never really been into the particular SchoolGirl fantasy as specifically portrayed in explicit videos.

Honestly in general that specific emphasis on that part of the fantasy rubs me the wrong way and is just a big turn off when done up too much. I won’t elaborate, but I think you can figure out what I am getting at without going into detail.

You might be saying,
“Enzo, but you know very well those models in those videos are not underage!”

Yes, of course, but depends where you are sourcing your images and videos. Some sites (not so much the spanking related ones) try real hard to make the models appear terribly young… No thank you.

Yes, also obvious; so credit to those producers who don’t go for the total underage vibe, but some of those tend to run into the extreme other issue. The issue of extreme disbelief. The makeup, the heels and all the over the top accessories that end up being almost reminiscent of an ‘80 hair band video.

(Note that this is not an all encompassing summation of my tastes. Have I played with Littles and do I enjoy that? Yes, but again that isn't quite the same to me as what some of those explicit videos are implying.)

Now don’t get me wrong - I obviously love a woman in a short skirt, pleated and plaid all the better. Demoted to a school uniform, icing.

But I’d rather the fantasy be played out in any number of alternate ways than what seems popular consensus.

For one, at a college level, which still is not correct, but at least it is strictly adults involved.

So if you haven’t clicked off this page after this revelation allow me to share my thoughts on our featured illustration.

I find this image a lot more to my taste based on the implied ages. (Call me a hypocrite if you will, but having two adults as I said is a lot easier for me.)

On the reality of this published artwork, I enjoy it because I still find it hard to believe that it was published in a mainstream magazine - on the cover no less! Now since I wasn’t around at the time of this publication, someone who was can correct me if I am wrong, but I don’t believe this magazine was hidden from sight as would be the adult magazines. Imagine the happy surprise to generally any curious eyes and no doubt to spankers. 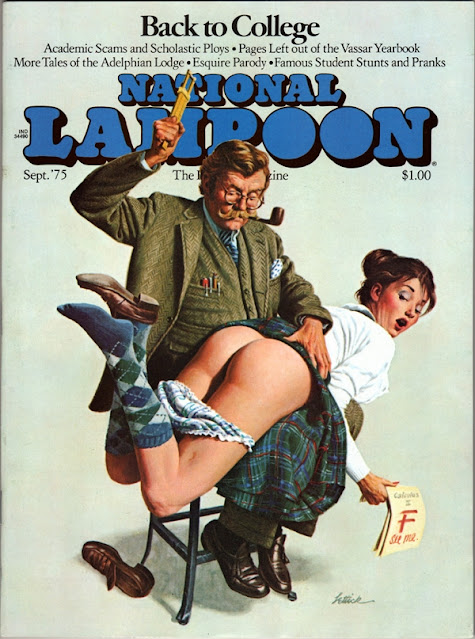 This cover art has our hero, the Professor, not only spanking the hard-headed Coed, but he has taken things further. Not only has he pulled up her skirt, he has yanked down her panties and is punishing her bare bottom! Again I am (happily) surprised this was on the cover. I would imagine the artist being told that illustration would have to show her with her panties in their upright position - and even that on the cover would seem risque to me for the time.

The illustration itself is excellent in my opinion. It is to the caliber of Norman Rockwell and the artist, Lettick, I believe was intentionally setting it up as such making it that much more appealing. He could have done a flatter image, a simpler angle, and ignored the details, but he did not. All the details as any Rockwell would include are there, from his pipe to his wool suit and from her wool skirt to her argyle socks. 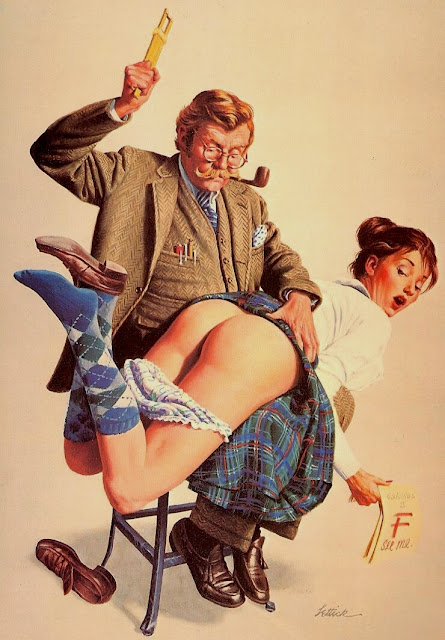 Plus, I love all the clever details including the use of a slide-ruler (rather than a plain ruler) to emphasize she has failed Calculus II as noted on her test sheet. Plus his instructions on said test sheet. All excellent.

So there you have it.

I found large size illustrations for your detailed analyzing and viewing pleasure. Just click on the last two images for the larger size images. Enjoy.

Let me know your thoughts overall and on this illustration in particular. Would love to hear them. Are you a fan or is it simply troublesome for you?

6 comments: Posted by Enzo at 12:12 PM
Email ThisBlogThis!Share to TwitterShare to FacebookShare to Pinterest

What ever happened to…

I think I will start a new segment on here.
It seems like I have quite a few subjects to fill in for the question of
“Whatever happened to…”

I know I haven’t been active on this little corner of the blogosphere very often as of late (meaning the last few months), but I was wondering about a particular blog that has gone missing. Yes, missing!

I'm aware of the long ongoing trend of blogs slowly disappearing, exiting over time while others shutdown with a sudden closure. It is always the ones that suddenly cease that are shocking. I am also aware that recently some blogs apparently were unpublished by error and then reincarnating under other names.

However, today’s question in particular is: 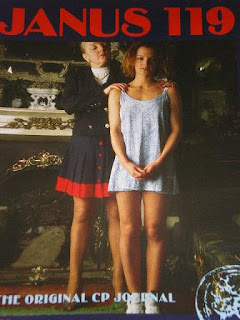 Whatever happened to the blog that would re-publish British Spanking Magazines almost in their full entirety, pictures and stories?
To complicate the reference and search, and truthfully and sadly because I am a bad blog fan, I can’t remember the actual name of the blog! 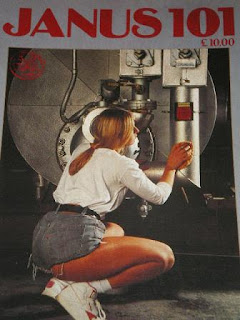 • I am not referring to the self titled blog of British Spanking Magazines. That blog stopped publishing new (recycled) material about 10 years ago.

• In contrast, the missing blog was still publishing up until a few months ago and had been quite active for quite some time (years?).

• Even though there was some overlap between the self titled blog mentioned above and the blog I am searching for, the missing blog would re-publish full picture sets and full stories, with additional details. Plus the quality of the scanned photos appeared to be overall better and larger. 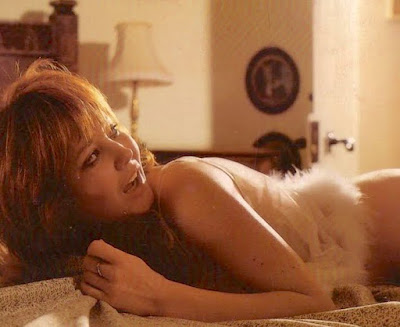 • To further add to the mystery (or the biggest mystery!) it seems to be missing from everyone’s blogroll! This is really peculiar as some inactive blogs are still on blogrolls some 7 plus years later! And yet in comparison, gone only maybe a couple months, it is missing on any list I've seen.

Perhaps it is still there and this is simply proof that I’m way overdue for my eye doctor visit (thanks again COVID).

So help me out readers and fellow bloggers.
Am I just missing it and it is still there on the blogrolls?

Or did it in fact disappear into the dark of night?

And if so, do you have any clues to why it vanished?

Until I hear back from you, before I release the hounds.

8 comments: Posted by Enzo at 12:06 AM
Email ThisBlogThis!Share to TwitterShare to FacebookShare to Pinterest