Well "young ladies" and gentlemen, brats, imps, visitors, lurkers and everyone else; welcome to another week. With that in mind here is another distraction.

For those of you who enjoyed Holiday Shopping Lessons: Part I, I have left you waiting long enough. I present to you Part II. For those  who didn't enjoy the first installment, you should skip this post...and perhaps this blog. Everyone else can read Part I here. It may serve as a nice refresher as to where we are in the story or as a catch up.

"Sir, we are closed"

"No, actually you are not closed" he corrected her. "Technically you don't close for another 15 minutes."

"Sorry we ARE closed. You can come back another time…maybe" she responded condescendingly while pushing the glass door into him.

He's stretched out his arm, stopping the door with one hand. Leaning himself deep into the salesgirl's face, he calmly offered an unsolicited suggestion.

"I am sure the owner, wouldn't appreciate you closing the door on any potential customers, would she? Maybe I should give Donna a call right now and let her know that…"
He looked down from her soft pale face to her golden name badge,
"…that Brittany, has instituted new shop hours?"
he suggested raising his eyebrow.

The petite sales girl let out an exaggerated audible sigh that caused her raven colored bangs to shake and hesitantly released the glass door as he maneuvered past her.

"Fine, but don't take your sweet time….we close in 15 minutes" she mumbled and then raised her voice at the reminder; miscalculating his earshot entirely.

Unfortunately for her, he had heard her entire comment clearly. He stopped and pivoted on his heel. Normally he was a man of patience and quite tolerant of the naiveté´ of young ladies. However today his patience was running empty having to march down to the boutique shoppe and deal with his errant wife and now receiving attitude from an arrogant sales girl.

"Excuse me?" he asked adjusting the full-windsor of his tie, "Care to repeat that?"

"Just a friendly reminder that we close in 15 minutes" she capped her comment with her well rehearsed disingenuous smile.

"What did you say before that?"  he questioned, folding his arms disapprovingly.

"Oh..ahh…I said it is near my sweet time to get off work" she fumbled with a possible save.

"Really? Why don't you just allow this customer do what I came here for, before I decide to take my sweet time, on that tight ass of yours" his tone calm and collected.

"Oh!" caught off guard by the comment she  turned and shuffled away towards the front of the store; her pert bottom tightly encased in a snug curve defining pencil skirt, seemingly following behind. He watched her glance over her shoulder one more time and he responded with a mischievous smile. Further startled, she retreated to safety behind the dress racks.

She had just maneuvered the dress over her shoulders and had began pushing it down when the door suddenly swung wide open. The door bounced back and forth for a few seconds from the force of the sudden blow before coming to a rest and leaving her backside perfectly framed in the doorway of the dressing room.

He heard her gasp, but focused not on her expression, but rather on the exposed tanned skin starting from the small of her back and continuing downward to her long defined legs. His eyes raced back up and fixated on her wash-worn faded pink panties; highlighted by a singular illustrated cat being devoured by a tight crevice between two plump cheeks.

"Aah..." obviously startled she cautiously looked over her shoulder. Stuttering in shock and not knowing what to do, she simply answered the question "Yy...yes."

Hesitantly she turned around, eyes dilated in shock and her arms wrapped and frozen in place; still holding her dress at her chest. He looked up at her face, surprised for a second to not see his wife. Casually he refocused his attention back down to the obvious one size too small cotton panties tightly restraining her protruding feminine mound.

"Cute. Obviously favorites of yours, but perhaps you've outgrown them" he nonchalantly suggested and without an apology nor closing the door, moved on to the next. 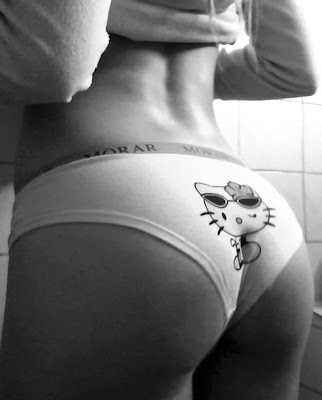 The dressing room door swung open with a loud bang and she jumped from the unexpected intrusion. Staring over her shoulder she couldn't believe her eyes. There was her husband standing in the dressing room, looking ready to wrestle death.

There stood his bride facing the mirror, naked in essence except for her sheer black panties which served minimal modesty purposes. She had tired of waiting and had begun getting redressed.

"Oh my gawd, what are you doing here?! Oh my gawd, you aren't supposed to be in the women's dressing room!"

"The better question is what are you doing here?" he stood in the doorway broadly.

"What do you mean?! I told you I was just shopping for a few things…." she began to explain.

"I think you fail to see your selfishness and irresponsibility in all this. You were supposed to be packing for our trip. We leave at dawn…"

That is how the lecture began and carried on as she felt a slowly tensing feeling in her stomach all the while knowing full well how the lecture would end. It seemed inevitable. He was angry and the fact that he had been forced to leave work early to find her here simply confirmed to what extent.

"You said you would call back? How did you get here? How did you know I was even here?!" she went from surprised to utterly confused.

"Shhh. Enough. No more talking. Most importantly, you had your phone off. I was worried. I thought…  What if the kids had needed to get a hold of you?!!"

His tone had changed and although she knew he was right, she was not ready to admit to anything.  And then the statement she had dreaded came out.

There it was! The signature sealing of her fate. Her stomach sank and her lip began to quiver uncontrollably. She attempted one last ditch effort at redirecting his anger. Her old trick, often tried. She placed her arms on her hips, straightened her posture and pushed her bare chest out with a nervous smile.

"Let's talk about this at home" she offered softly. 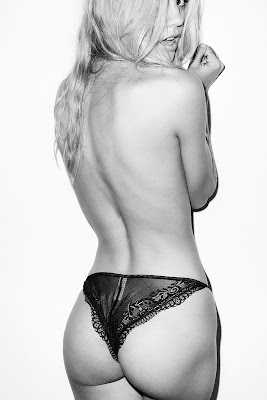 "That's not going to get you out of the serious trouble you are in. You need to learn a lesson...learn to know when I am serious. Learn when you should follow my lead..respect my lead!" The distraction obviously working to some extent as he began losing his train of thought.

Attempting to stay focused on his mission, he sat himself on the tiny wooden seat of the dressing room that faced the door and pulled her by the arm. He yanked her over his lap in one try and raised his hand high and brought it down with a solid smack.

"Oww!" she jumped up at the impact.

"That wasn't even the warm up" he told her, pulling back instantly he began a succession of solid continuos spanks. She began thrashing and kicking uncontrollably. She was normally more self-restrained during other occasions, but this time she let herself go for reasons unknown even to herself. With every spank, she kicked, grunted and swung her hair without regard.

Moments later he paused to get an idea of how red she was and was pleased by the blushed tones already showing through her sheer panties. He resumed his duty, but now spanked to a more timed rhythm. He would swing high, spank her firmly and leave his palm in place. Her bottom would jiggle and the energy would vibrate up his arm at which point he would then repeat. Slow and steady he carried out her discipline with short scolding sentences sprinkled in; plus the occasional instructions to keep still and stop kicking.

"Not only did you lie to me, but I had told you to wait for me as is and instead you started getting dress. Why can't you even follow simple instructions?" he asked her resting his hand on her hot throbbing bottom.

He was surprised to feel her moist. He rubbed his fingers further along her swollen lips and confirmed the now obvious. He took a deep breath and felt his lungs expand. It felt nice. All of it. He began rubbing the soft silky material which grew wetter with each finger stroke.

She let out a soft approving murmur.

"You are enjoying this? Are you?" he questioned aloud. Whether he was questioning her or himself wasn't exactly clear. Should she be enjoying this, he asked himself.

"Ah…aa.." she didn't know what the correct answer was and suddenly her embarrassment went from being spanked like a naughty brat to being caught excited during what was supposed to be a punishment.

Fully excited and needing release, he began pulling her panties down slowly by the thin lace waistband. Her reddened bottom gradually becoming exposed, but then the delicate material suddenly stuck. Confused, he pulled down, back and up; all to no avail. Then with a determined tug he released the trapped soaked material from between her quivering cheeks in an almost audible snap. The dainty material slid down her legs to rest upon her bare ankles.

An unexpected small voice squeaked out, followed by a thump and crash of hangers. They both looked up in shock!

To be continued...
But again would love to hear your comments thus far.

Posted by Enzo at 1:37 AM
Email ThisBlogThis!Share to TwitterShare to FacebookShare to Pinterest