The Victorias Secret Fashion Show 2013 which aired on network television last week.
If you are in this group of misfortunate souls whose eyes were deprived of the true eye candy show at its finest… Actually, it used to be eye candy at its finest. Apparently this year a strange assortment of Halloween costumes and Rave dance wear inspired the show.

OK, fashion critiques aside, where was I?
Oh yes, not to worry, if you missed it, you can still watch the entire show online here.

Perhaps, if you were too preoccupied with the current Christmas mayhem, responsibilities, duties, and countdown to craziness; you may have also missed news of another of the show's highlights. Perhaps you missed the announcement that one of the musical guest stars was the young and seemingly maturing pop star Taylor Swift.

If you have followed my blog from the earliest days (Would that include anyone besides myself?), you will remember that although I am not a fan of the young lady's music, I do prefer her persona over the other pop tarts. She continues to seemly remain true to her "girly" character of which I am a big fan of. Although she has disappointed me in the past that feminine charm gets me every time. (You can read all about that earlier disappointment here.)

Back to the current topic: Even further, perhaps you were unaware of the spankings that occurred at the recent fashion show! What is that you say?!! Yes, you heard me right, there was spankings at the Victorias Secret fashion Show!

Well there were spankings..technically...sort of.

Perhaps, thanks to the pseudo-news you may have heard about the one spanking Taylor gave during her onstage performance. If not, here it is as a nice animated gif below:

Apparently that VS model that Taylor smacked (Although one quick spank is hardly a spanking, right?) is Cara Delevingne, who also happens to be Taylor's gal-pal.
Here is the same moment captured in freeze frame: 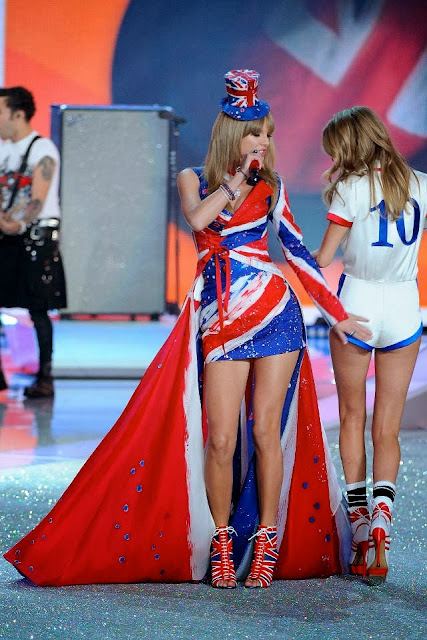 Well, believe it or not it gets better!

Taylor herself was spanked pre-show!
You can see that quick smack here: 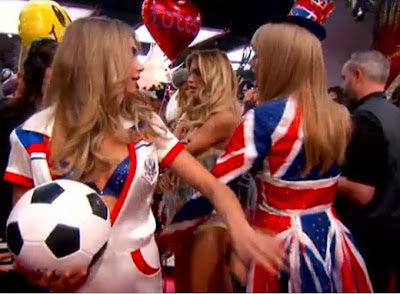 Or on the full video it is at ~1:02
(Again hardly a spanking, but good intentions none the less.)

And yet, there is more!
Apparently another Victorias Secret model wanted to spank Cara's bottom too! 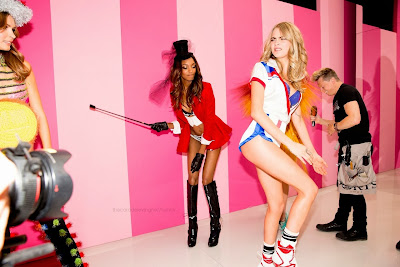 Either the red-coat model is a spankophile herself or she started getting too much into her equestrian character. (Does anyone know this model's name?) Regardless this young lady knows how to spank based on the expression on Cara's face.  I love that this was not only witnessed by others, but also shared via Instagram. And as an added bonus, check out the guy joyfully bringing over the hairbrush as the recommended next instrument to use. (Reminder to click on all images for full size versions.)

Well, perhaps the spankings were not what they could have been, but we now have clearer visuals for our dreams. And, yes perhaps one day Taylor will get the spanking she so deeply deserves. Her most current offense, to add to the long list, would be wearing that Union Jack dress! Last I checked, Taylor you were born in the good ol' US of A.

Am I the only one who thinks Taylor needs a real spanking?
Posted by Enzo at 1:11 AM
Email ThisBlogThis!Share to TwitterShare to FacebookShare to Pinterest