The Perils of Texting

Comments as always are Welcome, Appreciated and Needed.
PLUS now you can vote too. There is a poll for you at the end of this story.
Go ahead and vote it is anonymous.

She feverishly clicked away at her cell phone, lost in the interaction with her best friend and oblivious to the people and elements around her. The vast majority of the Friday afternoon post-work crowds, engrossed in their own priorities of escaping their personal torture of another workday, paid her no attention. She was yet another young office worker lost in her texting, walking slowly down the blustery street and simply made their way around her. 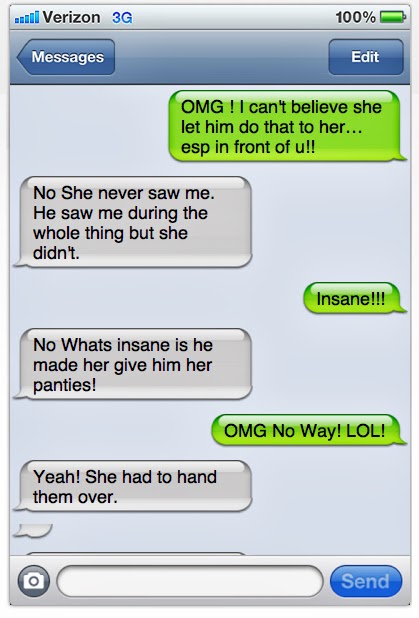 She was brought out of her digital trance as she saw her phone flash the missed-call icon. "Damm" she mumbled to herself knowing she would now have to cut her current text conversation short. She nervously typed the abrupt farewell to her friend,
"SRY GTG. M is calling me. Talk tonite"

As she texted the wind caught hold of her skirt and attempted to make a sail of it. The blustery June winds caught her skirt and slowly raised the thin material ever north. Had she not been in haste to text her husband back, she would have been more concerned about her skirt, but the last thing she wanted was to keep him waiting longer.

Hi Princess.
That was a quick text response...What were you doing?

What Exactly were you doing?

She was excited to tell him what she had just witnessed. The thought of telling him and exciting him was making her anxious to get home now.

And what else are you doing?

What else what?
You wont believe what happened…U will love it tho! :) :)

Let me clarify. I asked what are you doing?

What did we discuss about your dangerous texting habits?

She knew where the conversation was headed, the lecture that was coming and she wanted to deflect it.

I am NOT Driving!

No you are not, but you are texting and walking and
NOT paying attention to your surroundings.

But Hon U called me!

Were you not texting with someone else before I called you?


She was caught. She stopped walking, brushed her wind blown hair out of her face and focused on her phone.

Two guys walked past her craning their necks and chuckling. She looked down and saw her skirt billowing. She flushed red. Apparently he was right. 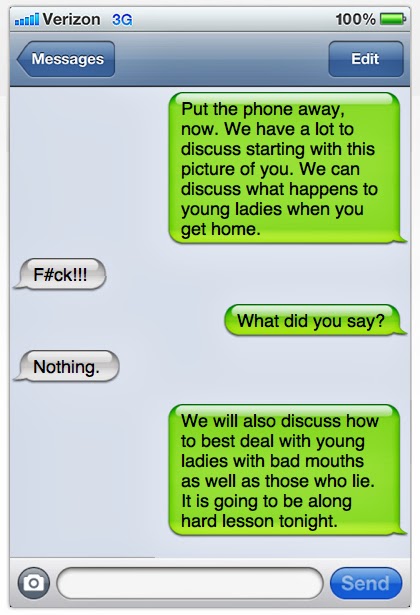 She couldn't believe it. He somehow knew what was going on, but he was nowhere to be seen. She fumbled to hang up the phone debating to call him back and apologize. She knew what she was in store for her when she got home. Just then a renewed wind-gust caught hold of her and seemed to funnel around her. Her skirt rose clear above her waist past her navel. Countless strangers were now treated to a full display of her long lean legs capped by her small black panties.

She closed her eyes in momentary shock as she heard parts of comments from strangers passing her by:

She was frozen in shock listening to the comments while she felt herself flush red; her temperature rising as the wind continued to have its way with her to the entertainment of strangers on the busy city street. The vibration of an incoming text broke her from her embarrass induced trance. She clicked to read the message:


Get home and wait for me.
Bare bottom an over the bed.
Those black lace panties at your ankles.

I hope you like them because they will be
in your mouth when I am done.

Posted by Enzo at 9:44 AM
Email ThisBlogThis!Share to TwitterShare to FacebookShare to Pinterest